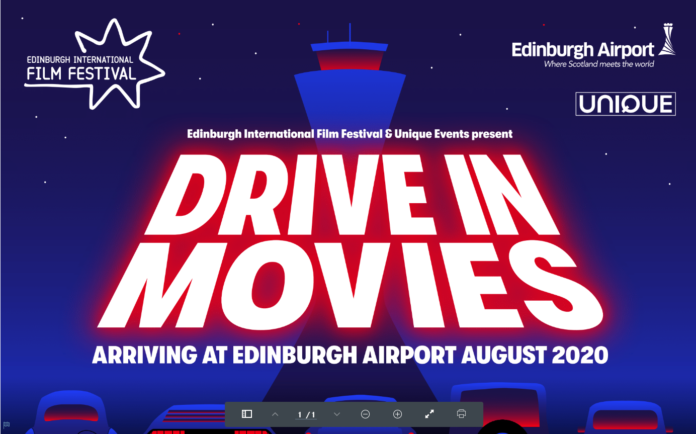 Tickets are on sale at www.edinburghdrivein.co.uk from 10am on Friday, 17 July.

Organisers of the Drive-in Movies said: “We are delighted to be able to share with our audiences the first batch of titles to be screened as part of Drive-in Movies next month. With a broad selection of timeless classics, family favourites and blockbusters, it truly offers something for everyone. We’re already working behind-the-scenes on the programme for the future events, but in the meantime book yourself a wild ride, and we’ll see you at Edinburgh Airport for some cinema magic.”

The Drive-in Movies August line-up includes 13 films: classics such as Airplane!, cult titles like The Princess Bride, family-favourites including Up and recent hits like Get Out and Mary Poppins Returns.

Every month from August 2020 until January 2021, Drive-in Movies will welcome up to 250 cars at the Edinburgh Airport car park, offering film fans of all ages a world-class cinematic experience in a safe, controlled environment.

Audiences are encouraged to book now at www.edinburghdrivein.co.uk for 27-30 August, the first weekend of Drive-in Movies.

More titles for the future events, including the second Drive-in Movies weekend (24 – 27 September), are to be announced in due course.

The films will be shown on a state of the art 100sqm LED screen, one of the largest mobile screens in the world with the audio broadcast straight to cars, for audiences to control the soundtrack.

Audiences will be able to arrive up to 1 hour prior to the film’s starting to take part in a car disco with a playlist relating to the screening, along with an interactive on-screen quiz with spot prizes. Food and snacks will be available to purchase from a selection of local food suppliers who will have stalls on site.

With cars suitably distanced apart Drive-In Movies will be a safe environment for families and friends to enjoy an event, in line with government guidelines for outdoor events. Standard tickets priced at £35.00 per vehicle for up to 5 people, with a number of tickets being made available to EIFF’s community partners.