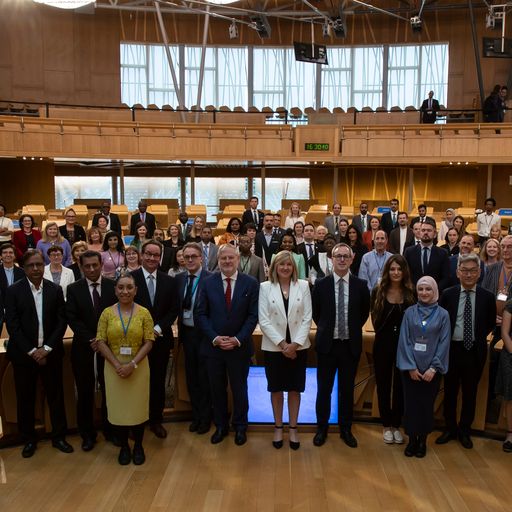 The opening day of the Edinburgh International Culture Summit heard from artists, ministers and cultural leaders on the importance of protecting cultural heritage and identity, specifically Ukrainian culture, in a number of moving and inspirational speeches.

Opening with addresses from Summit partners, the UK Government and the Scottish Government the assembled delegations heard John Swinney MSP, Deputy First Minister of Scotland [14:14:14] who commented,“Culture is truly an international language, and Ukraine’s presence here speaks to our shared belief that culture is of central importance to every society.”

Prime Minister The Rt Hon Boris Johnson MP welcomed the gathering in the Parliament [14:10:49], and Lord Parkinson of Whitley Bay, Parliamentary Under Secretary of State (Minister for Arts) [14:20:20] stated that culture is part of the solution to significant global issues and central to governments work.

Heba Alwadi, the first Youth Delegate to speak [15:19:31], paid a heartfelt tribute to Edinburgh and Scotland, after moving here from Syria six years ago: “My warm city, I walk in your streets for hours, speak into your corners, and you always embrace me and share my hopes and prayers.”

Oksana Zabuzhko, Novelist, Poet, and Essayist, Ukraine [14:38:00] saidshe had mixed feelings about the privilege of speaking to the summit today. Saying “No one wants to be the bearer of bad news, yet alas that’s exactly the part I am destined to play here.” She described the attack on the Ukraine as “The war aimed to destroy my country, to obliterate its very name from the records, in the most archaic, biblical manner.” Adding that Russian troops have destroyed 464 cultural sites across Ukraine including those on Unesco’s list of important heritage sites. She described the Russian forces prioritising of attacks against three categories of civilians, the military, the priests of Ukraine’s two independent churches and the intellectuals from school teachers to published authors.

Oksana shared photos of the stunning mosaics by the leading Ukrainian artist of the 60s Alla Gorska who was killed by the KGB in 1970, highlighting that this terror against Ukrainian intellectuals is not new. She described the destruction of these mosaics in Mariupol as her “being killed for the second time, a double assassination.”

The Minister of Culture and Information Policy of Ukraine, Oleksander Tkachenko joined live from the Ukraine [14:59:00] and talked about the attacks on Ukraine on the recent Ukrainian Independence Day and said “Freedom is the meaning of life for all Ukrainians.”  He talked of Russia’s use of culture as a justification of war saying “they are trying to ruin the very definition of culture.” “There is no question why the world should cancel Russian culture until the conflict is resolved.”

Piotr Gliński, Deputy Prime Minister of Poland and Minister for Culture addressed the Summit [15:13:40], talked about how Poland is supporting and promoting Ukrainian artists and musicians, including working with the Met in New York on establishing the Ukrainian Freedom Orchestra.  “Polish society is appalled… the scale of engagement of Polish citizens to provide for refugees is unprecedented.” He called for Russian broadcasters to be blocked around the world to limit propaganda saying “Sanctions in the field of culture are crucial.” Not limiting help to the immediate, he described the €1million being invested into digitizing cultural heritage sites in Ukraine, seeking to ensure that Ukraine’s culture and heritage becomes stronger than ever before.

Bandura virtuoso Maryna Krut, more famous as KRUTЬ moved the assembled audience with her performance on the Ukrainian harp [15:22:49].

Nicola Benedetti CBE, Violinist, Director Designate, Edinburgh International Festival [15:41:40]said: “Our very presence here today says that we are committed to a journey of development and improvement, that we want to change for the better. Just being here demonstrates our humility and our curiosity.” She noted that the culture summit, born in Edinburgh and housed here is owned and shared universally through our collective stories. That through education we are trying to open windows into worlds you would never dream of yourself, and access something within you that only requires bringing forth.

“Arts and culture are core to our identities as nations, and as a global community” commented Dr Maria Jackson, Chair, National Endowment for the Arts [15:04:45]. Adding that the integration of arts, culture and design feels important to building better transportation and environment. She called on us to see the opportunity to not do what we have always done but to step into a new age, inspired by the work we might do together as global citizens.

Yoshiki Takeuchi, Deputy Secretary-General, OECDspoke [15:56:21], saying “Culture helps new perspectives and new solutions to the challenges we face, this includes tackling exclusion and isolation, and improving health and social cohesion, as many of us witnessed first hand during the COVID crisis.” And he called on governments to recognise the importance of nurturing the sector, highlighting the need to raise awareness of the impact through improved evidence of the social benefits of culture, in turn strengthening support.

Dr Yalinu Poya Gow, Scientist in Green Sustainable Chemistry [16:04:23], described how climate change is affecting the Pacific Islands and the challenges they are facing such as rising sea levels and the destruction of coral reefs. Touching on issues brought to life by Salā Lemi Ponifasio, Choreographer, Founder and Director, MAU (Dance Theatre) [16:12:00] whose work “Birds with Skymirrors” was inspired witnessing birds building nests with videotape while he was in Micronesia.

This morning the Summit delegations experienced a glimpse of the future as Edinburgh-based leading laboratory for the arts and culture of tomorrow, The New Real launched its Open Prototyping toolkit to support ground-breaking collaborations between the Arts and AI.

The day closed with the first of three live broadcast panel discussions from the Culture Summit, Live from the Culture Summit, in which Jonathan Mills, programme director of the Culture Summit chaired a conversation with Volodymyr Sheiko, Director General, Ukrainian Institute, Heba Alwadi, Alumni, Trojan Women Project, Lillian Ngo Usadi, musician and researcher and Dr Maria Rosario Jackson, Chair, National Endowment for the Arts. The panel discussed freedom of expression, our late understanding of Ukrainian Culture and answering questions from the public about the influence of social media on modern and youth culture, and the idea that with complete freedom do we see an increase in systemic disorder? There are two further Live from the Culture Summit events which can be viewed on the Summit’s YouTube channel, on Facebook or at www.culturesummit.com

The partners welcomed the opening of the Summit:

Rt Hon Alison Johnstone MSP, Presiding Officer of the Scottish Parliament said: “The opening of today’s three-day summit signalled the importance of culture and its ability to bring people together and transcend boundaries.

“From established relationships to the forging of new ones, I look forward to the next two days of dialogue with those who have joined us from across the world.”

Cabinet Secretary for Constitution, External Affairs and Culture, Angus Robertson MSP said: “Culture plays such a vital role in how we think about the world and the creativity this sector brings can help us to tackle global issues in new and different ways.

“At a time when listening to the voices of others is increasingly important, particularly in international dialogue, I believe that the participants in this summit can contribute to a better understanding of how we can use culture to support a sustainable future for us all.”

UK Government Arts Minister Lord Parkinson said: “It’s great to welcome leaders in cultural policy from around the world to Edinburgh to discuss the vital role culture plays in freedom, education and wellbeing. This year’s summit is particularly poignant as we stand together with Ukraine and commit to supporting and protecting its rich culture.

“The Government of the United Kingdom is proud of our diverse and cutting-edge cultural sector and I hope we can use this summit to share our experience while also learning from the rich culture and creativity of our international partners.”

Sir Stephen Deuchar, British Council Trustee said: “The soft power generated through building connections in arts and education can produce hard outcomes – by improving trust between countries, increasing trade and prosperity and supporting peace and security. It is why the Edinburgh International Culture Summit matters.

“This year’s focus on the special role that culture plays in enhancing freedoms, improving education and combating climate change is relevant, urgent, and important.

“British Council is proud to be a founding Summit partner and to use our convening power to bring the world to Edinburgh.”

Fergus Linehan, Director of the Edinburgh International Festival said: “For 75 years, the International Festival and our colleague festivals have created spaces for artists and audiences from across the world to meet in a spirit of understanding and friendship. The Culture Summit is a natural extension of these connections, as it creates dialogue and explores ways in which culture can bridge divides.”

Freedom is essential to the protection of historical knowledge and cultural identity, to the education and development of children and young people, and of the entrepreneurs, cultural leaders, initiatives, and interventions that will secure the future.

The Scottish Parliament in Edinburgh has welcomed world leaders from the cultural sector to the opening of the sixth Edinburgh International Culture Summit, set against the backdrop of one of the world’s greatest cultural events, Edinburgh’s Festivals.

Ministers and Cultural Policy delegations from over 30 countries are attending the Summit this week from the UK, Europe, Asia, Australasia and the Americas, presenting a unique and vital platform to facilitate collaboration between artists, practitioners, thinkers and policy makers from across the globe.

Now in its 6th edition this year the theme of Summit 2022 is Culture and a Sustainable Future. Building on the succinct and successful format of previous editions, Summit 2022 addresses three key themes; Culture and Freedom, Culture and Education and Culture and Sustainability.