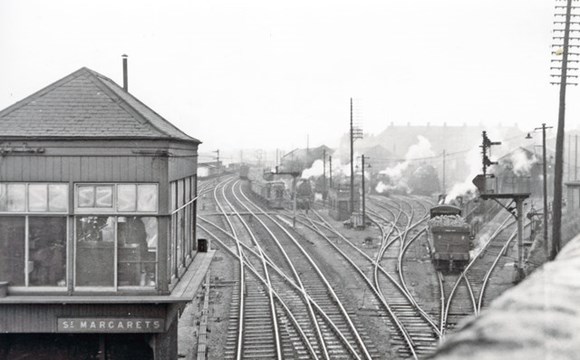 The site at Meadowbank is being redeveloped to make way for a new housing development which will become one of the Capital’s “greenest neighbourhoods” by incorporating low-car, low-carbon infrastructure with energy efficient homes. As part of this wider regeneration the site of the former St Margaret’s Locomotive Railway Depot and Works is being excavated and preserved for archaeological posterity.

Members of the public will be able to drop-in to see the work of AOC Archaeology at the remains of the St Margaret’s Locomotive Engine turntable between 10am and 4pm on Saturday 27 August. The turntable is one of the earliest examples of a its kind and a rare archaeological survival dating from the earliest days of the development of Britain’s Railways. The c.20m diameter structure was at the core of the St Margaret’s works and was used to store up to 14 railway-engines at a time awaiting repair.

This free event will provide an opportunity for members of the community to learn about this part of Edinburgh’s industrial heritage, before parts of the site are preserved and showcased as part of the Council’s public green space design for new homes in Meadowbank.

It feels appropriate, somehow, that we’re transforming what must have been one of the most polluted parts of the city into one of the greenest neighbourhoods in Edinburgh! We’re excavating the area because we’re investing in the future of Meadowbank, building affordable eco-friendly new homes next to our state-of-the-art new sports centre, which has also been built in line with our ambitious target to reach net-zero emissions by 2030.

It’s really fascinating to get a glimpse of the area’s past as we do this. Wherever we build in Edinburgh, others have gone before us and in this case it’s quite the trip through time – to the 1970s when the original Meadowbank Stadium was built, to the 1960s when coal powered engines had mainly been replaced by electric lines and the old engine shed shut down, all the way back to the 1840s and the dawn of Edinburgh’s first railway lines.

Council officers are working with local people to look at how we might be able to memorialise some of the findings, which I think is fantastic. They hope to be able to keep parts of the wheel on show and create a focal point for residents who move into the 675 new homes being built for sale and rent, at least 35% of which will be affordable and a number fully wheelchair adapted. We’re also creating community amenities too, with space for a new GP surgery and shops, at least 14 new job positions and seven apprenticeships, active travel routes through to Restalrig and over £100,000 in community benefit donations by contractors to local groups.

The remains of the engine turntable are a rare survival and take us back to the beginnings of our Victorian Railways in the 1840’s. The turntable in use until the closure of the works in 1967 formed part of one of the most important Locomotive works on the East Coast of Scotland. Our work with AOC Archaeology will help us not only to understand both the development of the structure but will also give us a window into the day to day hard work of our railway engineers during the age of steam.

We regard these remains as being of potentially national archaeological significance and these investigations will help us in preserving and interpreting the remains within the new development. We know from our earlier consultations with the local community that the history of the former St Margaret’s Works is important. It is therefore an exciting opportunity for us to open up the excavations to the public on 27 August.

The St. Margaret’s Railway Depot and Workshop was the largest railway depot in Edinburgh and for well over 100 years, from 1845 until its closure in 1967, was a focal point within Edinburgh. In its heyday the yards could have had over 200 steam locomotives on site. The works would have employed a large number of the local populace as engineers and workers keeping them busy on site with maintenance of the locomotives and running gear with numerous workshops for truck building, carriage building, wheel rights, metal working, joiners, painters as well as offices and stores. Much of the activity would have been focused around the turntable and the associated engine sheds. It is amazing to think how this now empty brownfield site was such a hive of industrial activity and these excavation works are looking to expose what remains of the long demolished turntable which had been crucial to the running of the depot.

St Margaret’s Works was the chief railway depot in South-East Scotland, so it is exciting to hear that the turntable has been uncovered and is to be conserved for future generations.  There are only three railway engine turntables surviving in Scotland, the nearest to Edinburgh being at Aberdeen.

This is a remarkable discovery, recalling 120 years of railway history, which began when the North British Railway opened its line from Edinburgh to Berwick in 1846 and located its locomotive depot and works at what became known as St Margaret’s.  As well as occupying an area north of the main line, the engine shed south of the line remained well-known until the 1960s.