UK tour of The Legend of Sleepy Hollow Extended 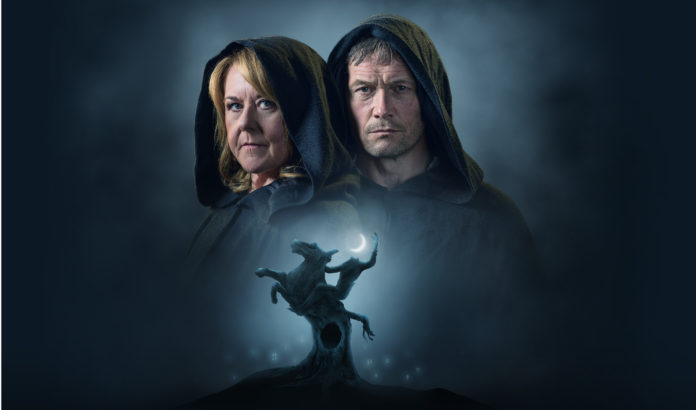 Stars of the stage and screen, Wendi Peters (Big! The Musical; Coronation Street) and Bill Ward (Everybody’s Talking About Jamie; Emmerdale), are leading a thrilling production of The Legend of Sleepy Hollow, currently touring the UK after huge success in 2021. Washington Irving’s classic tale has been given new life by acclaimed playwright Philip Meeks (Murder, Margaret and Me; Harpy) who wields the horror genre to reflect on the lingering appeal of fables, storytelling and monsters.  The ghoulish production revitalises the classic text to leave audiences simmering with anticipation.  Welcome to Sleepy Hollow.

Bill Ward speaks to us about the UK tour of this production.

How would you describe the show and your character to someone who hasn’t seen the production?

The show is a high energy edge of your seat thriller. Part horror, part comedy.  Very physical.  Think Hammer House of Horror meets Kneehigh.  We’re all multi-role-ing, which will be great fun. My main character is Baltus Van Tassel, who’s the elder statesman of the village – he’s trying to keep the village together during some pretty tricky times.  But I also get to play a naughty 90 year old female cook, a hard drinking coach driver, and a crazy delusional Dutch captain – what’s not to like?

What was it that initially drew you to the play?

The story – it’s a classic.  I was particularly intrigued as to how they were going to do the Headless Horseman – there’s a fair amount of magic both in the story, and also our telling of it – putting that kind of a thing onto a stage is always good fun.  Plus the physicality – I like doing plays where movement is an integral part of the show, and this is very much like that.

The Headless Horseman is a legendary figure in the horror genre. Why do you think this character has stood the test of time?

Because it plays to our imaginations, and to one of our strongest emotions: fear. Fear of the dark.  Of death.  Of the fantastical.  Of being caught in a chase you cannot possibly win – the stuff of nightmares the world over.  The Headless Horseman was arguably one of the first true horror creations – larger than life, and truly unforgettable.

Director Jake Smith comments, Sleepy Hollow is undoubtedly one of the greatest horror stories ever written and a tour de force to stage. This production has at its heart the power of nomadic storytelling and gathering around the campfire for a good ghost story. It is an important story for now as we look at conversations around the identity of nations, communities and humankind throughout the world.

This production has allowed an incredible ensemble of actors to viscerally and inventively bring the Hollow to life. It is a piece that shines on our actors’ athleticism, which is really exciting as we look to theatre returning. We look forward to transporting the audience through a quest of logic and illusion, creating fear and defying expectation.

Director Jake Smith (The Hound of the Baskervilles; A Christmas Carol; I’m Gonna Pray For You So Hard), is joined by Filipe J. Carvalho (Back To The Future The Musical; Secret Cinema presents Stranger Things) who brings jaw-dropping illusions to the stage. This story about storytelling leaves audiences considering how horror stories and fantasy has appealed to storytellers and theatre makers across the centuries, since Irving first put pen to paper in 1819.

Previous praise for The Legend of Sleepy Hollow:

“What’s thoroughly enjoyable, though, is the sheer panache with which director Jake Smith’s six-strong company deliver all this lively tosh, with Wendi Peters excelling herself as village crone Marietta Papenfuss, and the rest of the ensemble working so hard and so wittily in support that the audience fairly cheer them to the echo, when they all return to the land of the living for their final bow.”  The Scotsman

“this version plays with your fears and superstitions… it’s a real chiller, powerfully performed.” The Fine Times