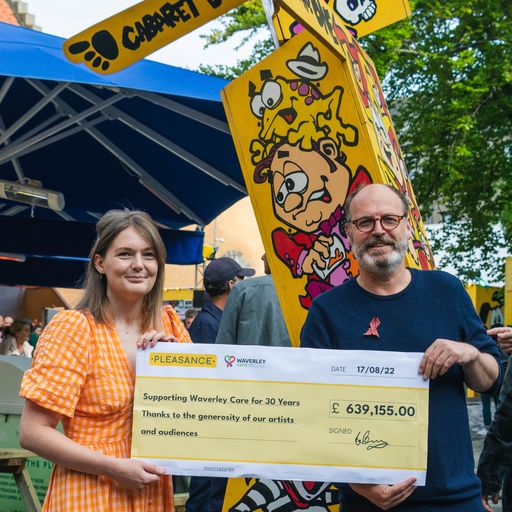 Since 1992 the Pleasance Theatre Trust has been a proud supporter of Scotland’s leading HIV and Hepatitis C charity, Waverley Care.

Every summer, Waverley Care’s team of volunteers can be found collecting donations throughout the Pleasance venues. Last night, comedians took to the stage for a raucous night of laughter in The Tartan Ribbon, raising much-needed funds for Waverley Care at this annual comedy benefit.

Hosted by five-star, award-winning, hit-podcasting, Frank Skinner-supporting Pierre Novellie,
audiences were delighted by 2014 winner of Dave’s Best Joke of the Fringe Tim Vine, Phil Wang who
is hot off the heels of his critically acclaimed Netflix special, Angela Barnes (Mock The Week; Live at
the Apollo; 8 Out of 10 Cats Does Countdown; and former chair of BBC Radio 4’s The News Quiz),
Edinburgh Comedy Awards Best Newcomer nominee Sindhu Vee, Edinburgh Comedy Awards Best
Show nominee Ivo Graham, Sarah Keyworth (Live at the Apollo; 8 Out Of 10 Cats; Dark Horse,
Comedy Special; The Guilty Feminist Podcast), amazing political comedian Njambi McGrath and Josh
Jones (8 Out of 10 Cats; Late Night Mash, Dave; host of Fast Food Face Off, BBC Three).
This year the Pleasance anticipates raising £26,980 for the incredible charity, meaning that across
their 30-year partnership they are proud to have raised a total of £639,155.
This generous support helps Waverley Care deliver life-changing services to people living with HIV or
Hepatitis C in Edinburgh and throughout Scotland. The partnership has also helped to raise
awareness and challenge some of the stigma that surrounds HIV and Hepatitis C. However, there is
still much more that can be done.
For more on Waverley Care’s brilliant, essential work, visit www.waverleycare.org