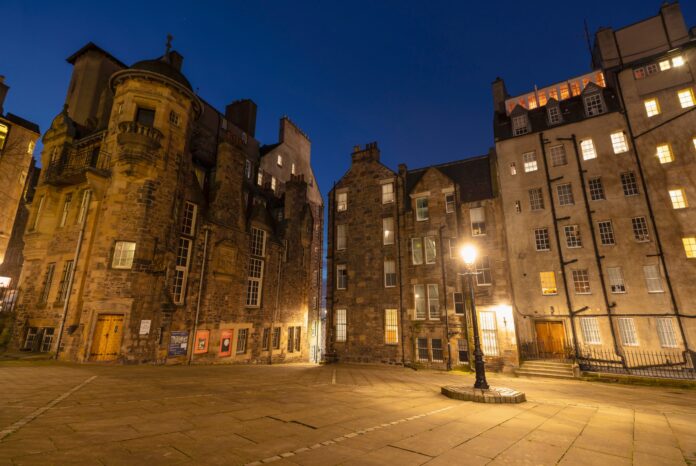 Celebrated Scots poet George Bruce, OBE, MA (1909-2002) is set to become the latest addition to Makars’ Court, where Scotland’s most esteemed writers have been celebrated since its establishment in 1998.

Located in the Capital’s world-famous Old Town, Makar’s Court is the Scottish equivalent of Poet’s Corner at Westminster Abbey.

Bruce will join the lofty company of Sir Walter Scott, Rabbie Burns, Robert Louis Stevenson and others at Makars’ Court where he will have a memorial flagstone inscribed with his name and the line:

It is the rare moment

when a word is sought.

Hailing from Fraserburgh in the north-east of Scotland, Bruce’s poetry references his family’s seafaring heritage in the herring trade and his own upbringing on the wild North Sea coast.

In addition to his extensive work as a poet, Bruce worked as a BBC producer for over 20 years and on his retirement was appointed as the first Fellow in Creative Writing at the University of Glasgow, alongside similar posts in the USA, and a Scottish Australian Writing Fellowship. In 2000, he received an honorary Doctorate from his alma mater, the University of Aberdeen, to add to another from Wooster College Ohio.

Reflecting on a literary career spanning over half a century, Bruce has been hailed as being ‘arguably the last great poet of the Scottish literary renaissance’ (The Guardian, 2002).

“I am delighted that the words and works of George Bruce are being celebrated and commemorated in the Makar’s flagstone dedicated to him and unveiled today. Edinburgh continues to be rightly proud of our UNESCO City of Literature status and of our unique and evolving literary monument that is Makars’ Court.”

“George Bruce’s addition to Makars’ Court reflects his indelible mark on Scottish poetry and he can now take up his rightful place alongside the finest literary figures in our nation’s rich writing tradition. Makars’ Court is a central fixture on the Old Town tourist trail and provides an opportunity for visitors and residents alike to explore the very best of Scotland’s writers. I would like to thank the sponsor of this flagstone David Bruce; this will be a moving and fitting tribute from a son to a father.”

The sponsor for this inscription, David Bruce said:

“Our family is delighted that my father is to receive such a recognition and be in the company of the most distinguished Makars of this and previous ages. He would be proud to be numbered with them. It was Professor Alan Spence who said that George Bruce should definitely be represented in Makars’ Court, and we are very grateful to him, and to the City of Edinburgh Council, for bringing this project to fruition.”