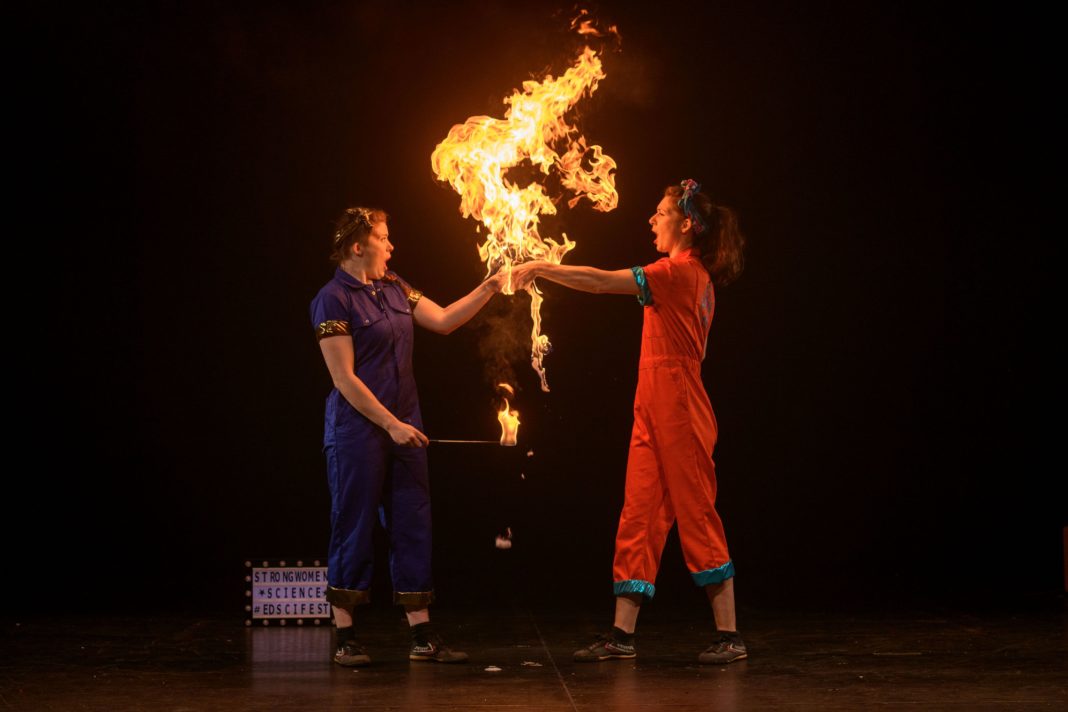 The Edinburgh Science Festival 2020, cancelled due to the Corona panic, has been reincarnated online as ‘Elements of #EdSciFest’

Elements of #EdSciFest draws on the original 2020 ‘Elementary’ theme for the Festival, using the old alchemical classifications of Earth, Fire, Water, Air and Aether.

Featuring dozens of free videos, Facebook Livestreams, blog posts, Q&As, online challenges and downloadable assets, Elements of #EdSciFest is live on sciencefestival.co.uk at 10am on Saturday 4 April with further events and assets to be added by 11 April.

In the face of the challenges presented by the lockdown, the Festival has called on its speakers and partner organisations to put together an exciting and innovative digital programme.

From the theme of Elements:

The Festival’s outdoor photography exhibition, Into the Blue, will be uploading the exhibition to their Instagram, taking users on a fascinating journey around some of Scotland’s most remarkable coastlines with stunning photography from local artists.

Online content will include a series of short science videos covering a huge range of topics. These have been filmed by speakers who were originally planned to appear at the Science Festival, along with some special new additions who were keen to get involved following the cancellation announcement.

Live-streamed content will include talks from broadcaster Claudia Hammond on the importance of rest in our fast-moving world, science writer Marcus Chown on the vast complexities of the Universe and Professor Ilan Kelman on how the majority of natural disasters are created or exacerbated by human choices.

Dr Raj Persaud brings back his TEDX and podcasts exploring themes such as seduction, pandemics and happiness.

Elsewhere, The University of Edinburgh have prepared a range of videos exploring issues around climate change. Also, Digital World (Skills Development Scotland) are sharing a range of digital workshops and online learning with fun tasks challenging audiences to Defend a Hospital and Steal a Pizza.

Instead of the Dinosaur Weekend that was planned for children at the Pleasance, the Festival has designed a series of dinosaur crafts that kids can download and make at home. Plus, two events that were planned for the Festival’s flagship family venue, the City Art Centre, will now take place in digital form as part of an Edinburgh Science takeover of the popular Earth Live Lessons YouTube series. On 10 and 11 April, viewers can livestream talks focused on our amazing oceans and Scottish wildlife.

National Space Academy, originally involved in Exploring Space Science, presents a series of events for the space-curious. These include demo videos with Tim Peake, first British European Space Agency astronaut to visit the International Space Station, a virtual tour of the Science and Technology Facilities Council including space rocks brought from Apollo missions, online library of the National Space Centre, a series of short videos in which team from the National Space Centre answers questions from the public via social media and a TEDX talk from Kierann Shah on how space can save the world.

Through a series of This Is Engineering short videos as well as STEM teacher resources from the Royal Academy of Engineering, the young minds get a chance to have a closer look at engineering careers and the difference they make in the world. Also exploring the world of engineering is This Book Thinks You’re An Inventor by Jon Milton and Harriet Russell. Elements of #EdSciFest presents colourful and simple one-page engineering challenges and activities that can be done at home.

For Minecraft fans, Society of Antiquaries present Crafting the Past, a website which digitally recreates sites in Minecraft, enabling audiences to discover Scotland’s history, heritage and archaeology, including free to download maps.

Amanda Tyndall, Festival and Creative Director, said:
“Two weeks ago, we made the sad but necessary decision to cancel the Edinburgh Science Festival due to the global spread of COVID-19, but it takes more than lockdown to keep us down!

We’ve reached out to our partners, participants and supporters, wracked our brains and trawled our archives and I’m delighted to announce that our online offering, ‘Elements of #EdSciFest’, will launch on 4 April.”

One Week Until Deadline Friday 14 August 2020