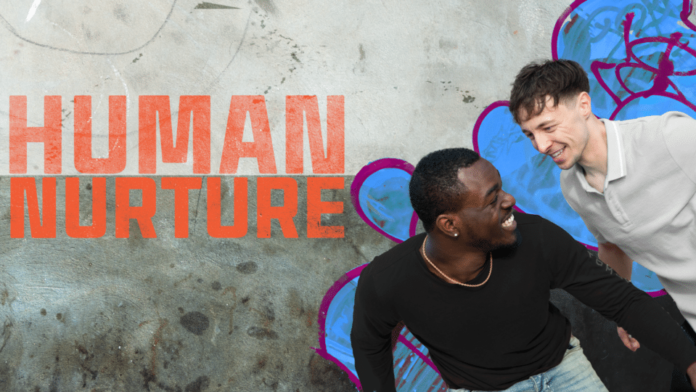 Theatre Centre has announced the cast and creatives for the UK tour of Human Nurture by Alfred Fagon Award–shortlisted writer Ryan Calais–Cameron (Typical, Soho Theatre; Queens of Sheba, For Black Boys Who Have Considered Suicide When the Hue Gets Too Heavy, New Diorama Theatre). Exploring race, privilege, allyship and masculinity, Human Nurture tells the story of two ‘could–be’ brothers whose lives are cleaved when one is rehomed and the other is left behind in the care system. In order to ensure that Human Nurture is as authentic as possible, Theatre Centre has worked with Ryan and many youngpeople from across the country to explore the themes of race and class found in the play.

Having grown up in care together, Roger and Harry’s bond is so strong they’re like brothers. They share everything, food, music, and even dreams – everything except their race. Roger is black and Harry is white; it’s never mattered to them but when Roger is fostered and Harry remains in care the boys grow apart and, in different cities and at opposite ends of the UK’s social spectrum, these differences come to the fore. Roger begins to connect with his cultural roots, while Harry falls into a crowd that are openly racist. Crucially exploring the intersectionality between race and class, Human Nurture unpicks how exclusion and socioeconomic context can affect worldviews and relationships.

Are people born racist? Can you be Black and truly be British? We make friends with everyone when we’re younger disregarding skin colour, race, or religion. So, what happens along the way?

Writer Ryan Calais–Cameron commented, With Human Nurture I really want us to collectively explore the reality of questions/statements that felt like a huge contradiction throughout my life and the lives of so many Black people that have been brought up in the UK, especially now whilst there is so much attention on Black lives mattering.

I am so excited at the prospect of Human Nurture touring into schools. I believe this play is a vital icebreaker into deeper needed discussions on race and belonging. I believe it should be seen as widely as possible, particularly now given the far overdue global fight for freedom, justice, and liberation from overt, covert, and systemic racism.
Theatre Centre is a national touring company that makes bold and relevant shows with and for young people. They work to unpack and explore what matters to young people in their  lives and communities, centring their experiences and voices. Commissioning new work from the most exciting writers and artists, which is developed and tested throughout the process with young people, Theatre Centre brings world–class theatre straight into the heart of schools;

Human Nurture is an important co–production with Sheffield Theatres that kicks off a major national tour and works to bring theatres and schools together to build deep relationships. It will be performed at schools in the first half of each week of the tour to ensure the production is accessible to those in an educational setting, with a new commitment to reduce their performance fee by more than 50% for state schools. Rob Watt comments, Since the start of the pandemic we have had so many conversations with Drama teachers across the country, listening as they told us how we and the sector can be useful tothem and really help. We’ve embedded so much of what we heard in our planning for the next few years, but a major step was to commit to reducing our fees for state schools to £300 per show for the next 3 years; this is more than 50% reduction. We hope that this will help as many schools as possible give the experience of seeing Ryan’s show to their students.
Theatre Centre has also recruited four new Trustees, who are: Yamin Choudury, Artistic Director at Hackney Empire; Chelsie Jones, Finance Manager at Venture Arts, former Youth Chair at Chester Zoo and Youth Champion for Time to Change mental health charity; Rebecca Major, Barrister, currently at the Financial Reporting Council, and Chair of the Equality, Diversity and Social Mobility Committee for the Middle Temple; and Vanessa Sauls, Musician and Recording Artist, currently Diversity and InclusionAdvisor at The Francis Crick Institute.