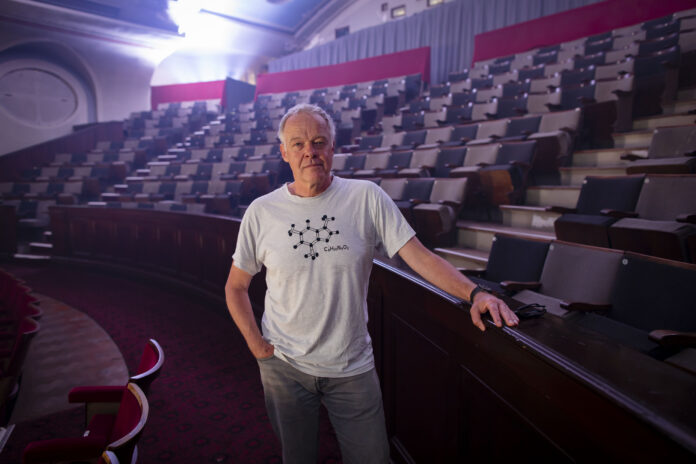 Leith Theatre Trust is delighted to announce that Bob Last has been appointed as Chair of the Board, commencing August 2022.

Bob Last is a widely known and highly respected creative leader and commercial consultant particularly in the fields of music and film. In a career spanning over 40 years, his expertise is recognised across the creative industries in Scotland and the UK, spanning public policy, education, intellectual property and cultural service.

His early entrepreneurial spirit in the music industry saw success as producer, designer and manager; celebrated recently as part of the award-winning documentary ‘Big Gold Dream’ (2015) and also featured in the ‘Rip It Up’ exhibition (2018, National Museum of Scotland). He has founded various creative businesses and brings a provocative, innovative and passionate spirit to the creative sector.

His influence as a member of the Scottish Government Creative Industries Framework Agreement Implementation Group oversaw the laying of the early foundations of Creative Scotland; his involvement informing public policy at an educational and government level.

His wide-ranging experience includes Chair of Cultural Enterprise Office (2002-2013); Chair of Edinburgh International Film Festival and Edinburgh’s Filmhouse (2012-2015); Co-Chair of Scottish Government Industry Advisory Group alongside Fiona Hyslop (2016-2020); and member of the short-lived Board overseeing the creation of Screen Scotland.

Bob is co-owner of Leith’s FirstStage Studios, the largest film studio in Scotland, with business partner Jason Connery. He has been at the forefront of championing Scotland’s burgeoning TV and film industry and is an Oscar nominated and BAFTA award winning film and TV producer with credits including ‘The Illusionist’ (Sylvain Chomet, 2010), featured in Indiewire as a top 100 film of the decade; and ‘She Will’ (Charlotte Colbert, 2021), due for imminent UK release and starring Alice Krige, Malcolm McDowell, Kota Eberhardt and Rupert Everett. It won the Golden Leopard for best first feature at last year’s Locarno Film Festival.

An early foray into architecture and structural engineering saw several years of study before being drawn into the creative industries and Bob brings his breadth of building knowledge as well as his extensive cultural and substantial business start-up and capital project experience to Leith Theatre.

Leith Theatre has had a long journey from its early ‘save the building’ campaign and initial community activist Board involvement. During Covid, Leith Theatre saw transformational change and a huge focus on the development of the board and strategic future planning.

A complete raft of building health surveys, a refreshed Feasibility Study, a capital fundraising strategy and new business plan mean the theatre is investment-ready with exciting plans for its future role in the local community and in the cultural ecology of Edinburgh and Scotland.

Bob’s appointment as Chair represents a pivotal moment in the vision for the building and early start-up business, and Leith Theatre is ready for the momentum and opportunity that this new Chair appointment heralds.

Lynn Morrison, Chief Executive of Leith Theatre said: “I am absolutely thrilled with the appointment of Bob Last as Chair of Leith Theatre. Bob brings with him a wealth of experience and knowledge that is undeniably current to the venue’s journey. He is a powerful ally with incredible commitment to the creative industries both across this city and the wider landscape. With the positive focus that Bob’s support will steer, I feel incredibly optimistic about our future.

Bob Last, incoming Chair Leith Theatre Trust said: “I’m excited to take on the role of Chair of Leith Theatre at a pivotal time. The Trust’s work has positioned the space ready for a vibrant future across performance of all kinds, building on the site’s legacy and the affection of past audiences to fulfill its potential within Edinburgh and the Leith community’s cultural landscape. First and foremost, however, this is a wonderful building in need of a newly negotiated lease, capital fundraising, and continuing refurbishment as the vision blossoms. I am looking forward to working with the committed team at Leith Theatre to ensure the complexities of this project can be managed innovatively to deliver an iconic event space.”